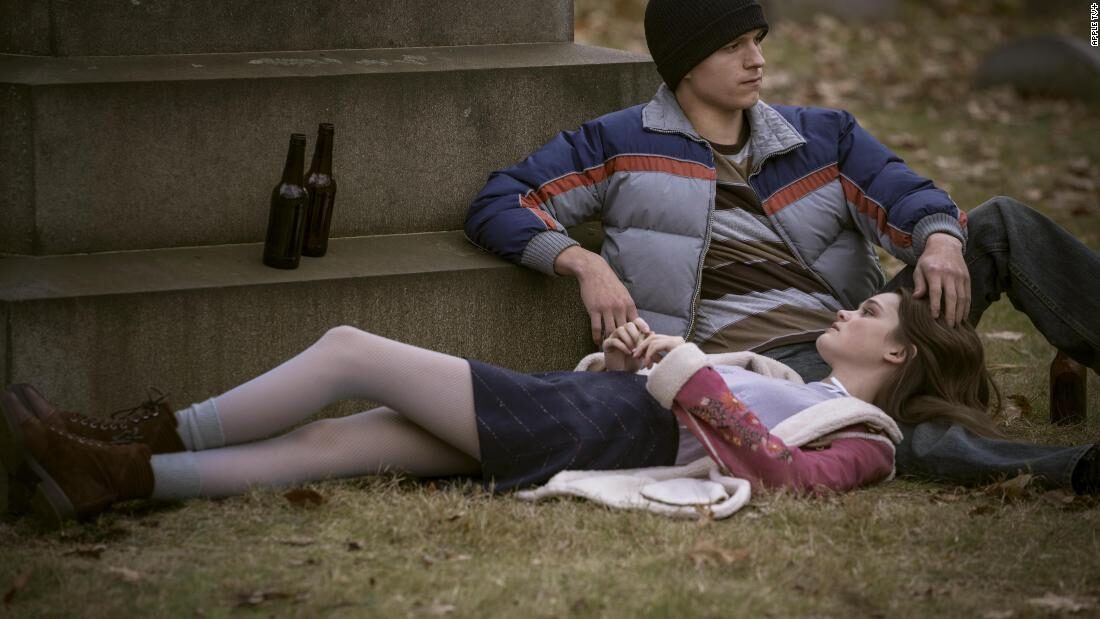 Beginning as a student in Ohio, Holland’s title character goes through a wide arc of instability. He falls in love, joins the Army, goes through basic training and the horrors of war, and returns home a disaster, quickly devolving into addiction and crime to fund his habit.

“Cherry,” which is densely narrated by the protagonist, has the classic features of films about ruined middle-class dreams, unfulfilled promises, and desperation. The young man and his beloved Emily (Ciara Bravo, a former Nickelodeon star) fall hard and fast in love, marry young, and go through hell, with the question of whether they can survive together, or even if they can live at all.

Following his appearance in another gloomy drama, Netflix’s “The Devil All the Time,” opposite Robert Pattinson, Holland’s expansive nature of the part — which begins in 2002 and overlaps with an arc of Iraq-war history — was undoubtedly a hard-to-resist showcase. If the young actor wants to avoid being stereotyped as Peter Parker, he’ll take charge.

Similarly, without using computer-generated imagery, directors Joe and Anthony Russo follow the epic grandeur of their extended run in the Marvel universe with a gritty, deeply intimate character study, eliciting strong performances from Holland, Bravo, and the various losers and miscreants they encounter hero in sight..

Despite this, “Cherry” nearly feels like it’s connecting together cinematic tropes, from war films to crime thrillers. The ominous narrator — lines like “Sometimes I feel like I’ve already seen everything that’s going to happen” — and the way the chapters divide the storey into sections spanning his service and its aftermath are the same.

Finally, there’s a strong sense that this is the kind of film that directors and actors seek out after a triumph like “Endgame,” exploring the boundaries of their skill and appeal in a setting as far from from superhero escapism as possible.

“Cherry” is significant for its ambitions and for charting Holland’s evolution as an actor, but it’s ultimately a strong blast of star power that doesn’t get under your skin.

“Cherry” will be released in select cinemas on February 26 and on Apple TV+ on March 12. It’s an R-rated film.

Fire breaks out on the sets of Kinshuk Mahajan and Shiny Doshi show Pandya Store, producers say ‘everyone safe’