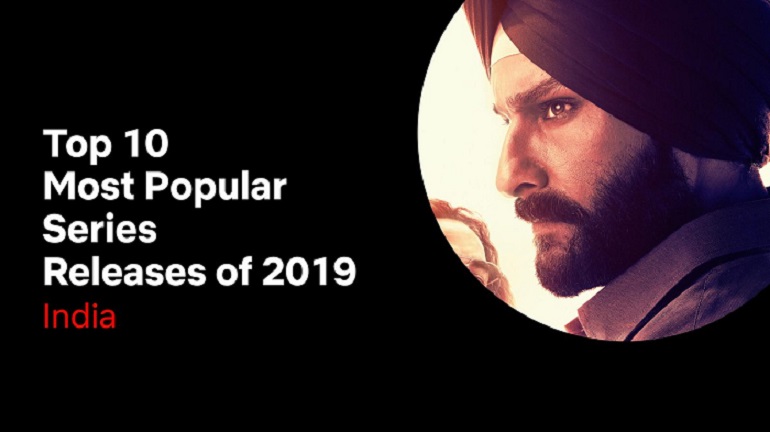 Netflix has released the list of the most popular web series in India for the year 2019. The second season of ‘Sacred Games’ topped this top-10 list. This web series by Anurag Kashyap got the most buzz. Apart from this, many foreign shows attracted Indians.

On August 15 this year, the second season of the most awaited series ‘Sacred Games’ was released. This time Pakanj Tripathi hit the entry. He came in the form of ‘Guruji’ and was overwhelmed. However, fans were not happy with its open end.

Shahrukh Khan and Emraan Hashmi made their digital debut this year. Shahrukh Khan entered the world of OTT as a producer and Emraan through the series ‘Bard of Blood’ on Netflix. Shobhita Dhulipala and Vineet Singh also appeared in it. The Spy web series was well received in India.

The incident of Nirbhaya on Delhi shook the entire nation. A web series appeared on Netflix on this sensitive issue. Richie Mehta directed Shefali Shah and Rashika Duggal in the lead roles in this web series.

This web series of foreigners were seen fiercely in India. This web series was liked all over the world. Sex education was also included in the most-watched list released by Netflix this year. As of now, its second season has also been announced.

Huma Qureshi starrer ‘Laila’ was released at the beginning of the year. This web series was seen extensively in India. It showed the future of India. There was a lot of discussion among people about its content. The audience is waiting for its second season.

Typewriter is an Indian horror web television series, horror drama directed by Sujoy Ghosh. Starring Purab Kohli, Palomi Ghosh, and Sameer Kochhar in the lead roles. The First episode was released on 19 July 2019. The story revoles around a haunted house and an old book stir the imaginations of young wannabe ghost hunters, but when a new family move to town, the home’s buried secrets resurface.

Little Things is an Indian web television series by Pocket Aces. It features Mithila Palkar and Dhruv Sehgal in the lead roles. A third season was released on 9 November 2019 by Netflix.

The Witcher is a fantasy drama web television series created by American showrunner Lauren Schmidt Hissrich for Netflix. It is based on the book series of the same name by Polish writer Andrzej Sapkowski. The eight-episode first season was released in its entirety on December 20, 2019.

The Spy is a French espionage web television miniseries, written and directed by Israeli director Gideon Raff and Max Perry, based on the life of Israel’s top Mossad spy Eli Cohen, who is portrayed by Sacha Baron Cohen. The six-episode miniseries, released on September 6, 2019, on Netflix, was said to have been inspired by real-life events.